As smart speaker adoption continues to ramp up, it’s having a pronounced impact on how U.S. listeners access radio station streams. New data shows the portion of online radio listening occurring on smart speakers has more than doubled from January 2018 to January 2019.

Based on data provided to Inside Radio from Triton Digital, 19% of total listening hours to AM/FM radio streams occurred on smart speakers in January 2019. That’s a whopping 111% year-over-year increase from January 2018, when just 9% of streaming took place on voice-activated speakers like Amazon’s Alex and Google Home. The biggest spike came in the second half of 2018, as the listening contribution from smart speakers accelerated from 11% in July 2018 to 19% in January 2019.

Mobile devices largely held steady during the same time frame, representing 44% of online listening to broadcast radio streams in January 2019, compared to 42% one year earlier, Triton’s Webcast Metrics show. But the portion attributed to “other” platforms, which mainly consist of desktops and laptops, fell year-over-year to 38% from 49%. 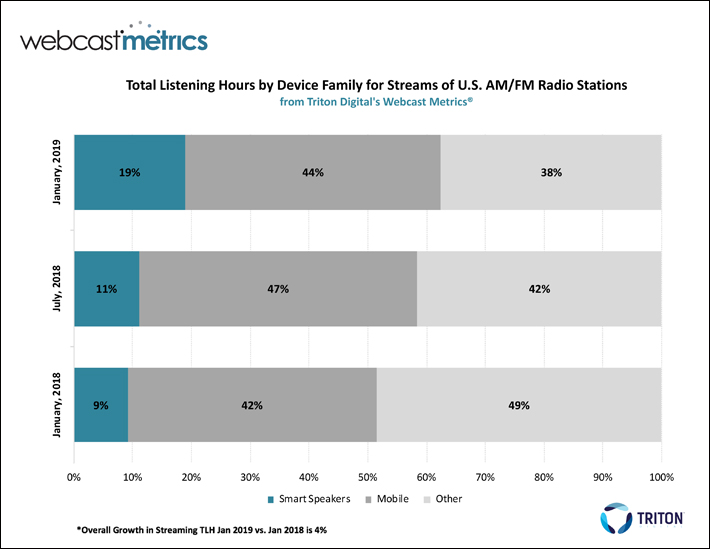 The Triton data reflects all listening to the station streams it measures, regardless of where they are consumed. That means the smart speaker numbers include both listening occurring via the broadcaster’s proprietary skills and on non-publisher-initiated skills from audio aggregators such as TuneIn and iHeartRadio.

The decline in “other” suggests some online listening has shifted from desktops and laptops to smart speakers. But smart speakers are also causing total online listening to go up. Overall, the listening to streams of AM/FM radio stations grew 4% year over year. And while the Triton numbers show a 9.5% decrease in listening hours attributable to desktops, laptops, and other devices, the decline was more than offset by consumption on smart speakers and mobile devices, which contributed 10.5% and 2.8% respectively to the overall growth in listening hours, says John Rosso, president of Market Development at Triton Digital.

While they are absorbing some listening from other devices, smart speakers are also facilitating additional listening, Rosso observes. “The whole universe grew 4% so obviously more people are listening to AM/FM streams than they were a year ago,” he says. “But certainly there appears to be a share shift and some of the listening that might have happened on laptop or desktop systems a year ago is now happening on a smart speaker.”

It seems a new study is issued every week touting smart speaker’s increasing ubiquity. NPR and Edison Research recently issued data that as of the end of 2018, 21% of U.S. consumers own a voice-activated speaker. (Edison and Triton will update the number during this Wednesday’s Infinite Dial research presentation.) Over the 2018 holidays, a staggering 8% of Americans received or purchased a smart speaker, between Black Friday and the end of December 2018. That means that 53 million Americans now own at least one Alexa or Google Home device, which represents an equally dramatic 78% year-over-year increase. Over the last year alone, there were 14 million consumers who got their first smart speaker device. As of Dec. 31, 2018, the installed base of smart speaker devices was 66 million units, up from 53 million units in September 2018 and 36 million units as of December 2017, according to Consumer Intelligence Research Partners.

The new Triton data reinforces the significant opportunity for radio to increase listening in the home. “It validates the appetite for consumption of AM/FM radio stations on these devices and that smart speakers represent radio returning to the home,” Rosso says.

At iHeartMedia, CEO Bob Pittman says smart speaker listening to iHeartRadio has now exceeded that occurring on the web and is catching up with listening on mobile devices during certain dayparts. “We’re huge on Alexa and, for that reason, Alexa has now surpassed web in terms of listening,” he told AdAge editor Brain Braiker on a recent episode of the Ad Lib podcast. “And when we go into periods like the weekends when people aren’t out of home as much, it can be as high as iOS and Android.”

While the new Triton data shows radio has found a place on the smart speaker, there still remains plenty of growth opportunity as the devices become ingrained in the everyday habits of more Americans. Rosso's advice to broadcasters: “Pay attention to this audience and know that there’s an appetite for consumption here.” For starters, he advise stations “make sure their streams are available for consumption on these platforms, whether through audio aggregators or through a station’s own proprietary skill, which you then have to promote.”

In short, Rosso calls smart speakers the new table stakes for radio. “If there a menu, you have to be on it,” he contends.

Beyond another point of access, step number two in exploiting the burgeoning new platform is to make radio a more interactive listening experience. “For the most part, radio is a turn it on, set it and forget it experience and there’s not a lot of interactivity on smart speaker platforms,” Rosso points out. “As people get more creative about how to engage the audience beyond simply having them listen, there will be considerably more opportunity there.”

Rosso and others believe the devices have become a mechanism for driving more listening in the home. “We’re seeing solid growth in consumption of audio via smart speakers, how a larger and larger percentage of listening is done through smart speakers,” says Jim Kott, senior director of Product Management at WideOrbit, which provides streaming services to numerous broadcasters. “They are definitely a catalyst for more listening in the home.”