The economy may be throwing a few speedbumps in front of podcasters but estimates the industry will reach $2 billion of revenue this year continue to hold, albeit with a bit less certainty in the voices of those that repeat the forecasts. Where will the next billion dollars of revenue come from was the focus of a conversation at last week’s Podcast Movement, with an eye toward the thousands of shows that currently make little to nothing.

They are focused on the so-called “long tail of podcasting,” which Signal Hill Insights President Jeff Vidler says their research with Triton Digital shows stretches far. As part of the Podcast Metrics data collection, between third quarter of last year and second quarter of this year, the 12,269 podcast listeners they surveyed mentioned listening to 12,235 different podcasts. “That means the average listener who says they listened to three podcasts in the last month, added one more podcast to that long tail,” he explained. “It is not about the hits. The top 200 only represent a little over one-third of survey mentions because there is a lot of engagement with listeners out in the long tail.” 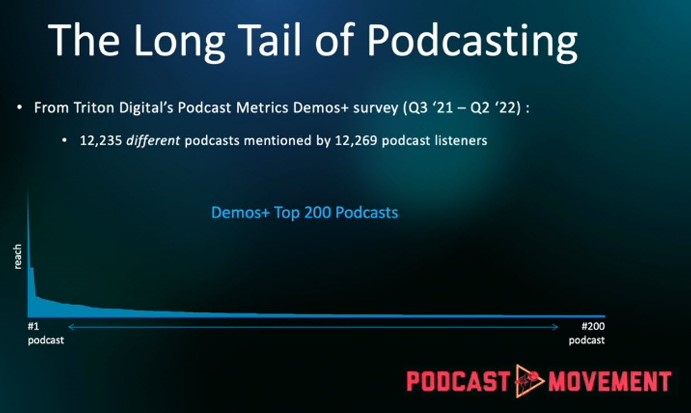 “What we’ve seen is more podcasts are being successful at building an audience than before,” said Triton SVP of Measurement Daryl Battaglia. “That’s a good sign for the industry, as well as for podcasters hoping to find success.”

Triton says there was a 28% increase in the number of podcasts that had at least 1,000 downloads among the publishers it measures. And the smaller tier of shows is also growing the fastest. Shows with between one and ten thousand monthly downloads grew 54% versus a 16% growth rate for podcasts with 10 million or more downloads each month, led by podcasts in the True Crime, News and Sports genres.

“There’s growth across the board,” Battaglia. “But the long tail is really driving the growth in the industry.”

Vidler said the data also supports the long tail theory that, over time, consumption moves from the hit shows to the niche.

The opportunity for the podcast industry is to begin to grow the revenue on those shows that are currently mostly overlooked by ad buyers.

“It is absolutely critically for the growth of the industry that we are monetizing all impressions,” said Heather Osgood, CEO of True Native Media Agency. She said fears that podcasting could become over-commercialized are mostly unfounded. “When you look at podcasts and many other forms of media, the reality is podcasts don’t have overwhelming ad loads,” she said.

Sarah van Mosel, EVP of the iHeart Audience Network, sees the consolidated companies like iHeart, Spotify and SiriusXM as part of the answer to monetizing the long tail.

“It’s never been a better time to be in the long tail because any platform you plug into, it’s probably got a pipe from one of these big, consolidated networks that really want your impressions,” she said. “It’s a new way of thinking about it.”

Osgood launched True Native Media in 2016 with the hopes of helping everyone find a bigger piece of that advertising pie. She points out that a lot of podcast inventory currently goes unsold in part because the dynamic ad insertion technology that could plug those vacancies has yet to catch on among buyers.

“A lot of the media buying agencies are not super-interested in dynamic ad insertion. There are concerns about how it is really performing and whether it is performing the same as embedded ad reads,” she said. Osgood thinks that will limit growth for the time being. “As much host-read endorsements are really powerful and have this ability to create this connection between the audience and the advertiser, we can never fully monetize a show if we’re relying 100% on host-read ads.”

Van Mosel agreed, saying host-read is akin to a “handcrafted, artisanal” thing and while they remain “super-effective” they can be inefficient. She suggested new “balances” are starting to come into play around the process of getting the ads into the show and that is what is driving the long tail’s potential.

Battaglia said advertisers want to know that where they are advertising is brand safe, and easy to buy. It is why the tools and technology are being put into place. “The brands and advertising dollars will continue to increase in podcasting. There’s too much incentive for us not to build these tools,” he said.