After launching podcast measurement services in Latin America and Australia, Triton Digital has debuted its U.S.-focused product. The company on Monday released its first Podcast Report ranking the most-listened-to podcasts among the publishers that have so far signed on to be clients of the service.

Among the publishers that have become Podcast Report clients are several radio broadcasters which also use Triton to measure digital simulcasts of their AM/FM stations, including Beasley Media Group, Entercom’s Radio.com/Cadence13, Cumulus Media/Westwood One, Focus On The Family, and CBC-Radio Canada. Users of Podcast Reports also include Fox News, NBC News, NPR, Stitcher, and Wondery, Notably not included by Triton are some of the largest podcast companies, such as iHeartMedia, PRX and the New York Times.

“We are pleased to expand our Podcast Reports to the United States, providing buyers with the trustworthy, third-party podcast measurement they need to make informed decisions around podcast advertising,” said John Rosso, President of Market Development at Triton Digital. “Our Podcast Reports are providing networks with the reputable consumption data they need to grow their podcast strategies, gain a better understanding of their audiences, and increase their advertising revenue,” said Rosso in a statement.

Triton’s debut report shows NPR is the largest publisher, a position it also holds in Podtrac’s monthly analysis. Triton says NPR has more than 39 million downloads per week of its shows with many of its podcasts filling the ranker of individual shows. NPR is followed by a tie between Entercom’s Radio.com/Cadence13 and Stitcher – both with about 22.5 million downloads during the typical week – with Wondery, at 19.7 million, and Cumulus Media/Westwood One at nearly 9.7 million rounding out the top five.

Overall, Triton says the top ten networks had a combined 501 million downloads between February 17 and March 15 when the data was collected. 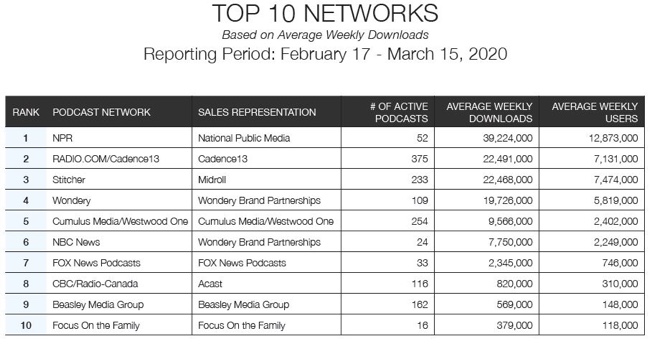 In terms of the most-downloaded individual podcasts, Triton says NPR’s hourly five-minute podcast NPR News Now had the biggest number of downloads. It was followed by Stitcher’s My Favorite Murder and The Daily Wire/Westwood One’s The Ben Shapiro Show.

Measured by unique audience, Triton says NPR News Now is also in first place, followed by NPR’s Up First and My Favorite Murder.

Triton says its Podcast Reports have been certified by the IAB Tech Lab, and its measurement complies with the IAB’s version 2.0 measurement guidelines. For some of its clients, it is the first time they will have third-party data to present to ad buyers rather than self-reported download data. That’s welcome by ad buyers whose clients are increasingly demanding better metrics to measure podcast investment.

“As podcast titles increase and listenership continues to grow, it is essential to have third-party industry sources to measure and validate top performing shows,” said Lauren Russo, Executive VP and Managing Partner Audio Investment at Horizon Media. “As the podcast marketplace continues to evolve, having access to tools to inform our plans and negotiations will only contribute to continued revenue growth.”

Triton continues to expand its Podcast Reports around the globe. The company has said the next country where it will measure podcast downloads is the Netherlands.